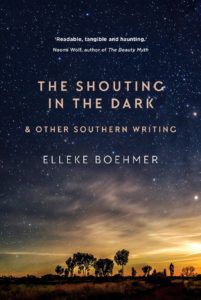 Late at night Ella watches her elderly father on the verandah, raging at the African sky. Caught between her mother’s mysterious grief and her father’s shattering wartime experiences, between the Holland of their past and apartheid South Africa, Ella fights hard to make it through her childhood in one piece. Her one enchantment is her forbidden love for the teenage gardener, Phineas. Years later, seeking political refuge in the Netherlands, Ella discovers her father never registered her birth. Now she must confront her father’s ghosts, and create a new future for herself.

The story, as disturbing as it is enthralling, of a girl’s struggle to emerge from under the dead weight of her father’s oppression while at the same time searching for a secure footing in the moral chaos of South Africa of the apartheid era.

A secret duel to the death between a father and a daughter.  Distilled with an intimate sense of history, and very moving,The Shouting in the Dark is a powerful novel of memory, family politics and awakening.

Boehmer’s The Shouting in the Dark … mirrors and mines the affective charge of a South African cultural and public life now avowedly post-TRC and shaped by new orders of private and public feeling, force and anger.

The Shouting in the Dark is a text that seems to be written through the mists of memory. Boehmer’s language is feathery – barely touching the surface of her stories, pregnant with things left unsaid.

Read more about the novel