Elleke will be presenting a paper, entitled ‘Eavesdropping or Broadcasting – how to tell stories in the dark,’ at Telling Tales, Writing Stories, an interdisciplinary colloquium at TORCH in Oxford.

Find out more and register

Elleke will be interviewed by Nancy Jouwe at this year’s Tong Tong Fair about Op de veranda.

The Shouting in the Dark has been longlisted for this year’s Sunday Times Barry Ronge Fiction Prize. As Books Live note, the prize criteria stipulate that the winner should be “a novel of rare imagination and style, evocative, textured and a tale so compelling as to become an enduring landmark of contemporary fiction”.

The shortlist will be announced on Saturday 14 May at the Franschhoek Literary Festival. 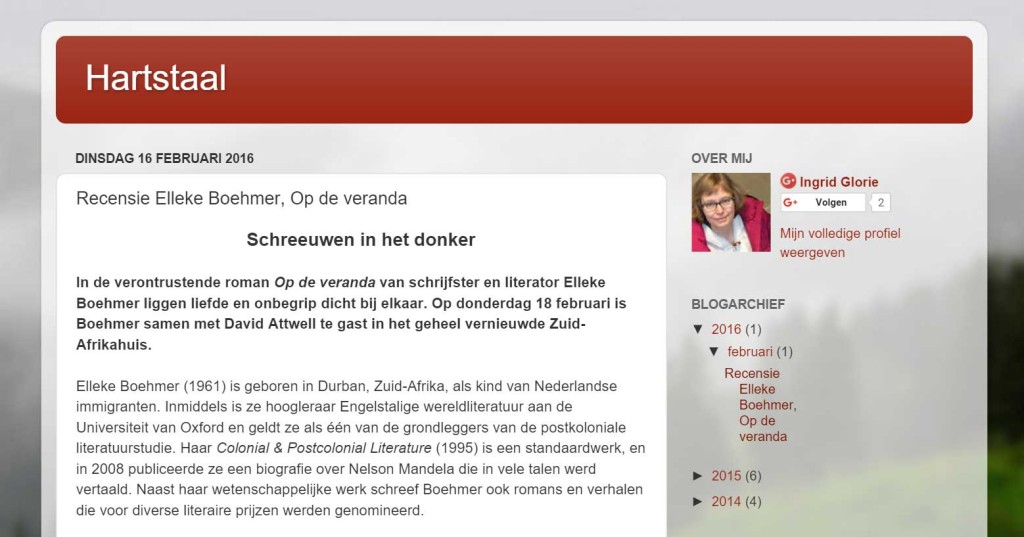 Elleke Boehmer, Professor or World Literature in English at Oxford University and biographer of Nelson Mandela, will give the Writers’ Centre at Norwich a revealing behind-the-scenes look at the making of The Shouting in the Dark. This interactive World Literature masterclass is a must for anyone interested in life writing, and will offer practical advice on the creative and technical issues of using fiction as a tool for exploring big ideas.

The Witness‘s Moira Lovell has written this of The Shouting in the Dark:

While Boehmer is a skilful writer, she has created, in The Shouting in the Dark, an uncomfortable read . . .