Empire, the National, and the Postcolonial, 1890-1920 explores the political co-operations and textual connections which linked anti-colonial, nationalist, and modernist groups and individuals in the empire in the years 1890-1920. By developing the key motifs of lateral interaction and colonial interdiscursivity, Boehmer builds a picture of the imperial world as an intricate network of surprising contacts and margin-to-margin interrelationships, and of modernism as a far more constellated cultural phenomenon than previously understood. Individual case studies consider Irish support for the Boers in 1899-1902, the path-breaking radical partnership of the Englishwoman Sister Nivedita and the Bengali extremist Aurobindo Ghose, Sol Plaatje’s conflicted South African nationalism, and the cross-border, cosmopolitan involvements of W. B. Yeats, Rabindranath Tagore, and Leonard Woolf. Underlining Frantz Fanon’s perception that ‘a colonized people is not alone’, this richly detailed book sustains a ‘broad and challenging thesis’ and provides new possibilities for ‘reading resistance between the margins’ (Interventions).

Published by Oxford University Press, 1998
Edited with an introduction and notes

This is the first anthology to gather together British imperial writing alongside native and settler literature in English, interweaving short stories, poems, essays, travel writing, and memoirs from the phase of British expansionist imperialism known as high empire. A rich and starling diversity of responses to the colonial experience emerges: voices of imperial adventurers, administrators, memsahibs, propagandists and poets intermingle with West Indian and South African nationalists, Indian mystics, Creole balladeers, women activists and native interpreters. Drawn from India, Africa, the West Indies, Australia, New Zealand, Canada, Ireland, and Britain, this wide-ranging selection reveals the vivid contrasts and subtle shifts in responses to colonial experience, and embraces some of empire’s key symbols and emblematic moments. Comprehensive notes and full biographies ensure that this is one of the most compelling and readable source books on the period. 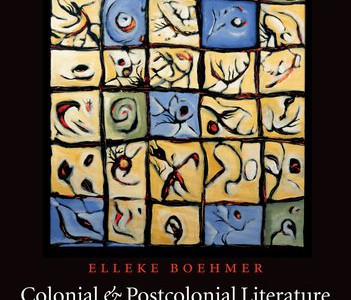 This title remains unparalleled for its historical breadth and the clarity of its theoretical discussion, and contributed to establishing and defining the field of postcolonial and global literary studies. Augmented by the author’s novelistic insights, the lively historical narrative explores key colonial and post-colonial developments, texts and cultural figures, from Joseph Conrad and R. L. Stevenson, through to Chinua Achebe and Manju Kapur. In a notoriously complex field, important theoretical terms and issues are illuminated by way of close readings of key texts, but without ever losing subtlety or historical insight.

Published by Dangaroo, 1994
Edited with Laura Chrisman and Kenneth Parker

In conversation with author and editor Moira Forsyth, Elleke Boehmer will discuss her novel The Shouting in the Dark, in the context of her childhood in apartheid South Africa, and the themes of family, war, trauma and memory she has explored in it.

To attend this session, please register for your FREE place for XpoNorth here: http://xponorth.co.uk/

There are no upcoming events at this time.